How safe is hydrogen peroxide for your teeth? 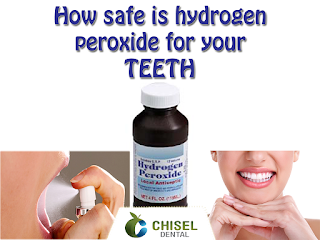 Dental specialists from Chisel Dental Clinic exhort that in the event that you need to brighten your teeth then the best choice is to contact your dentist. You should take your dental specialist's advice before experimenting with any teeth brightening item. Using the items without asking a dental specialist can have extreme outcomes, for example, – weakening of teeth, gum disease, swelling in the mouth or in horrid cases-loss of teeth.
Posted by Chisel Dental Clinic at 03:20

Chisel Dental Clinic
Chisel dental clinic was first established near Ulsoor lake junction which has now expanded to another two branches with a team of ten specialized doctors, located in Kormangala and Indiranagar. With our growing experience and successful treatments we have been serving our patients by solving their dental problems.